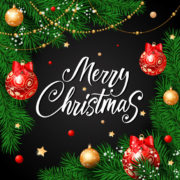 Merry Christmas! As promised, here are the jokes I’ve been sharing on Facebook and Twitter in the run up to Christmas.

Dec 1: Two aerials met on a roof, fell in love and got married. The reception was brilliant.

Dec 2: Why is there no aspirin in the jungle? Because the paracetemol.

Dec 3: I’ll tell you what I love doing more than anything – trying to pack myself in a small suitcase. I can hardly contain myself.

Dec 4: Two men are in a pub in Leith. The one with a piece of tarmac in his hand said Let’s have one for the road.

Dec 6: A sandwich walks into a bar. The barman says: “Sorry, we don’t serve food in here.”

Dec 7: What do you call a singing computer? A Dell.

Dec 8: I’m in a restaurant and this duck comes up with a red rose and says: “Your eyes sparkle like diamonds.” I said: “Waiter, I asked for a-ROMATIC duck.”

Dec 10: What do you get if you eat Christmas decorations?

Dec 11: Concerns rise for wellbeing levels after the latest survey shows only one out of seven dwarfs is happy.

Dec 15: A three-legged dog walks into a saloon in the Old West. He sidles up to the bar and says: “I’m looking for the man who shot my paw.”

Dec 16: “My therapist says I have a preoccupation with vengeance. We’ll see about that.”

Dec 17: A jumplead walks into a bar. The barman says: “I’ll serve you, but don’t start anything.”

Dec 18: A dyslexic man walks into a bra.

Dec 19: Police arrested two kids yesterday, one was drinking battery acid, the other was eating fireworks. They charged one – and let the other one off.

Dec 20: A burglar broke into a house and stole biscuits, chocolates, nuts, sweets and a packet of crisps. Police say the culprit was a snack head.

Dec 21: A man called at my house and offered me a settee and two easy chairs. I refused them of course because my parents always told me never to accept suites from strangers.

Dec 22: All those who believe in psychokinesis raise my hand.

Dec 23: What’s is Santa’s favourite pizza? The one that’s Deep Pan, Crisp and Even!!

Dec 25: My favourite, The Balloon Joke – click here to hear me tell it live! 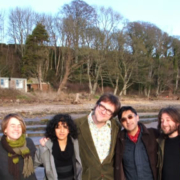 I was lucky enough to be invited by Dumfries and Galloway Arts Association to participate in the Burnsong Songhouse, getting to stay in the amazing “house on the shore” near Dumfries with the lovely people above: Emma Pollock, Karine Polwart, MC Soom T, Michael Johnston, Sushil K Dade, (Future Pilot AKA), King Creosote (Kenny Anderson) and also Chris Difford (not pictured as he was already on the way to another Burnsong gig!)

It was a fantastic experience – writing, and then performing with such lovely, and talented, folk.

If you don’t already know their music,
I’d highly recommend checking out my fellow housemates below: