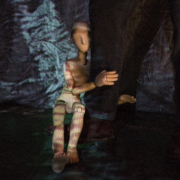 The Rendition Project is a unique collaboration between academics and supporters of human rights, which has published research around the involvement of the US and its allies in human rights violations following 9/11. With information on detainees, the global network of detention facilities and over 11,000 so-called ‘rendition flights’, at its core, the project holds governments to account for their actions, whilst representing the victims of their abuses.

I’ve been honoured to be involved in the development of a soundtrack for Tragic Carpet’s radical new work, Rendition, which uses these research findings to explore individual stories, bringing to life the realities of rendition flights, and torture, and how the British Government colluded with the CIA. For me, Rendition raises important questions about how we treat fellow human beings.

It’s hard to describe the show itself, which is a powerful mix of puppetry, soundscapes and visual theatre. Here are a couple of links to wee tasters for the show that might give you a sense of it:
CANDLES
FLIGHTS

Rendition runs next week from Tuesday 5th – Saturday 9th March at 8pm in the Roxy Snug Bar, Edinburgh, which will be transformed into an installation within which the audience will experience the work. Tickets are available here.