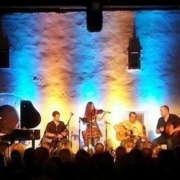 I’ve been loathe to write a post this past week, with all that’s been going on in Paris and around the world, as well as close to home.

How do you square the joy I felt in performing with my bandmates in Soltau on Friday night (in a beautiful, new, felt factory museum, of all places – transformed into a music venue for the first time with the care and attention of volunteers), with the unfolding revelation, after our tasty post-gig Italian meal, of the atrocities that befell innocent audience members at a different concert, and everyday people enjoying their dinner, in Paris? How do I stop myself from imagining the sheer terror some people must have experienced in the moments before their death, and from a growing sense of helplessness?

How do I acknowledge my pleasure in playing a Grotrian Steinweg grand in Hannover, and finding a beautiful new teal merchandise case, alongside the unexpected loss of a generous, benevolent and supportive radio producer, who is ultimately the reason I’m making music, and all the bereavements which I’m aware are currently devastating the life of others? How do we all hold all of these kinds of things together? And acknowledge, with sensitivity, that even when really big, hard stuff is happening, all the little stuff, and the good stuff, continues, too?

After days of reflection, Ive decided that the only way for me to do this is to practise gratitude. So here are some things I’m grateful for, from the world outside the tour van:

Stewart Cruickshank was a very special man. Everyone who knew him agrees. On Tuesday, on my way to teach Christmas carols to a Primary School choir, I learned in the car of his death. I was deeply saddened, because Stewart had a huge impact on the path my life has taken over the past ten years.

Back in 2005, as a member of the board of Burnsong, Stewart heard some kind of potential in me, in a song submission for unsigned songwriters, and had the kindness and generosity to tell me so, and to convince a timid, nervous songwriter that she had something of value to say and should continue to try and say it. Through support on the Iain Anderson show (not just then, but ever since), and Stewart’s continuing encouragement, care and kind words, and the experiences which being one of the winners of the Burnsong Gathering 2005 afforded me (including being completely blown away by the songwriting and performance of Karine Polwart), I decided to leave my job as a primary teacher and pursue a career as a songwriter. The experiences snowballed into several fantastic years writing and performing with The Burns Unit, and then a song from that project brought me to the ears of Gudrun, which led to my most and unexpected (and fortuitous!) career move to date – to become a member of Cara.

This is not a unique story. Almost ever other member of the Scottish industry that Ive spoken with over the past few days has their own story of how Stewart took them under his wing, or helped them to develop. He had a genuine passion for music, of all kinds, and also a generous heart. What a legacy he has left behind him. I will always be grateful to have known him.

There’s a danger of feeling overwhelmed and helpless in the face of terrorism. It’s an abyss of despair that’s easy to fall into. But from reading accounts of the response of members of the public to the attacks in Paris on Friday, there were two strong images which stayed with me: the surge on social media of porte ouverte messages from locals opening their doors to help strangers in need of a place to hide, or sleep, in the face of grave danger, and a man who instinctively grabbed the hand of a woman, a stranger, he lay beside on the floor of a restaurant during an attack. He didn’t know it at the time, but she had been shot in the chest. Nevertheless, she died comforted by and connected to another human being. I’m grateful that as humans we have an instinctive goodness.

I may have a low (or no!) taste barrier when it comes to music – I tend to enjoy everything! But nothing leaves me feeling more inspired than when I listen to music that I know intimately, recorded, or live, by my favourite artists, or when I hear community groups of all ages and abilities singing together. There is something about group singing that is truly magical.

In my first home break during this Cara tour, we took the kids from The BIG Project Youth Choir along to hear Love Music, a 350 strong community choir based in Edinburgh’s Usher Hall, ably led by Stephen Deazley with super talented Dave Milligan at the piano. In this performance, we were also treated to the beat boxing wonders of The Hobbit who thoroughly inspired our choir members.

We were attending this performance because the kids at The BIG Project are just embarking on a song commission, which well perform with Love Music next March in the Usher Hall. Its to be inspired by the writings and thoughts of Canadian astronaut, Chris Hadfield, the former commander of the International Space Station, who is talking at the Usher Hall next year, after his blogs, songs and writings became very popular. One quote from his astronaut’s guide to optimism seems particularly pertinent at the moment:

There are problems with everything and nothing is perfect. But that shouldn’t be cause to bemoan. That should be cause to achieve.

On the way to the concert, walking towards the 22 bus stop, a nine year old boy that I was responsible for gave me (and another child in our group) a white friendship bracelet. I was touched, and gladly wore my bracelet for the night, unfortunately forgetting to return it to the child when we got back to Broomhouse (it’s to be noted that I can’t be trusted with pens or money, either). This week, during my four day stint at home before the final three gigs of the tour, I remembered to catch the child while I was at The BIG Project in order to return the bracelet. Wordlessly, but with a few small sounds, he stuck his hand out, and gave it to me to keep. A generous, quiet gesture.

I’m wearing that bracelet today as I travel, to remind myself of all the small, good things happening on this tour, and all over the place, that we can be grateful for, despite there being problems with everything. I’m looking forward to performing the last three gigs of our autumn tour with my bandmates – hopefully making good music that spreads a little bit of happiness to our audiences, and having fun ourselves – even though there’s loads of hard stuff that I’m aware of, too. And I’m remembering another thing that Chris Hadfield said, that each of us are the only ones who can change things for the better, together.

Its actually the same message as in Gudrun’s lyrics from the title track of our forthcoming album, Yet We Sing: in darkness, raise your voice.