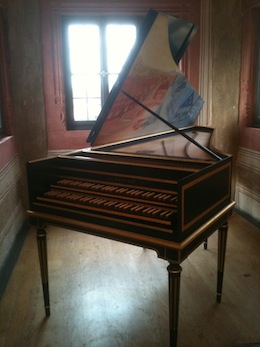 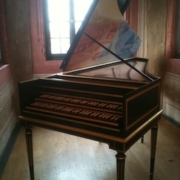 It’s the first CARA rehearsal day before my first tour with the band! And as soon as I get my head round counting in 7/8 everything’s going to be fab!!!

Flew out in the early evening last night and the view from the plane was glorious, a proper comfort blanket of clouds…

Today we’ve worked through all the pieces in the set, and tonight we set up in the local arts centre for a full on stage sound rehearsal tomorrow – but that’s not what I want to tell you about! I’m really enjoying finding all the gadgets and machines which make everyday life different in Germany.

Bottles of water, purchased in crates, can be recycled at the entrance to the supermarket, which gobbles up the whole crateful of bottles in one smooth motion and in return gives you a credit note towards your shopping.

When buying your fresh coffee beans, there’s a machine inside the supermarket for you to grind your own beans, and a cellotape dispenser for you to reseal your purchase.

And in the Cara house, I’m getting kitchen gadget envy! A beautiful dried chilli grinder, and the most impressive of all – a hand operated bread slicer. How to fit this into my suitcase for the journey home?

Today we did a full soundcheck and rehearsal in the local arts centre in Esslingen, and everything’s coming together nicely!

Went for an amazingly cheap meal at at the Asian Wok, where I may have had the best beef curry ever…and the fortune cookie after dinner says “One has to celebrate the party as it comes” – so here’s looking forward to the tour!

Actually, I brought a few fortune cookie messages from my mum and dad’s Italian chocolate stash…they’re written in German as well as several other languages, so I’m hoping to impress my German bandmates during the tour with unexpected moments of wisdom, in German! If I can read them in the stage lighting…

Last night I played my first gig in the band, Cara, in a fantastic venue in Bad Pyrmont – a palmhouse, where palm trees overwinter out of the cold. During the summer months when the palms are happy outside, the town council have turned this very tall greenhouse into a music venue.

We had a very friendly welcome, and a good first gig together, followed by a beautiful Italian meal in the town. There’s a tree lined avenue right outside my hotel room, where the ground is strewn with fallen conkers, which makes me feel very much at home! I’ve picked out a beauty for future conker matches…

We’re in the north of Germany at the moment, which feels a lot like home in many ways – sheep, heather, Scots pine trees – but in others, it’s so different: fields of sweetcorn (used for green energy and causing a lot of controversy here) and asparagus, windmills, and flat, open landscapes. The sun came out this morning and the drive to Rolf’s house for lunch was truly beautiful.

Last night, we played in another unusual venue – an old smokehouse converted to a farming museum – and I was surrounded by interesting objects, each with a story, translated by Gudrun…

If you know my song, All The Little Sunbursts, then you’ll know how much I appreciate little things that make life better… wifi has been scarce, but quite apart from really enjoying the gigs, there have been plenty of sunbursts along the journey with CARA since I’ve been in touch last (not only real ones): a fantastic session after the gig in Troisdorf in an Irish bar with the support band, Crosswind; having the time to listen to all my favourite Tori Amos songs; the gorgeous town of Niederstetten with a beautiful river walk; a hotel boasting a sauna and steam room (they really know how to do these well!); the finest dining I may have ever eaten (lamb with rosemary, green beans and potatoes to die for), and a friendly physiotherapist whose massage has rendered my back freer than it’s been in years…I really can’t complain. And now I can bend over with the rest of the band to take a bow!

As we embark on the third leg of the Cara tour (we’ve decided that the tour has five legs and a tail…) I have to say that I’m having a wealth of new experiences. On Friday of last week I played the harpsichord for the first time in Lichtenfels, thanks to a kindly stage manager, and in the beautifully quirky venue in Kaiserhammer, Helmut, our host, accommodated me in a circus wagon, as well as running up to the wagon (in fields high above the venue) in the dark very late at night to light me a fire in the stove. I’ve been trying many new foods, which for those of you who know me well, is a big achievement. During some days off I’ve been lucky enough to sample home cooking from Juergen and Gudrun, including spinach and meat filled “mouth pockets” which were delicious, and a hearty bean and pork belly stew accompanied by apple and cinnamon pancakes.

Finally, there’s the whole sauna experience. Having now spent two days relaxing in German “Saunalands”, I’m still struggling with my own prudish attitude towards nudity! I’m keeping my towel firmly wrapped around me. And yet there appears to a whole country of people of all ages and sizes who don’t have any issues with their own bodies, or with nakedness. Is it just me? Is it a Scottish thing? Answers, please…

If you’d like to catch a Cara concert live, we’re trying to stream the Cara reunion gig this Saturday, which is celebrating 10 years of the band and many different line ups: you can check it out here: http://www.cara-music.com/live

We played in the sumptuous “Parktheater im Kurhaus, Goeggingen” in Augsburg last night; I don’t think I’ve ever seen a more ornate establishment! And the hotel Villa Arborea was fantastic too, with the friendliest staff on the tour to date. Steffen, our talented sound engineer, did a great job (as always), making for a most enjoyable day all round. But the mystery remains, what happened to our mysterious piper, Ryan Murphy, directly after the gig? As the queue for Ryan’s autograph continued to build, several band members made the search…fortunately, we did retrieve him in time to sample good company and a local dark beer in the nearby hostelry before retiring to bed – how do the Germans make duvets so well? Are they available for import to the UK? Sleeping is just so much better in German bedding.

We’re now on the final leg of the Cara tour, after a lovely off day at the amazing Parkhotel Heidehof in Ingolstadt. A proper treat, with indoor and outdoor pools, saunas, steam rooms and a great jacuzzi. Two more gigs, and then I’ll be flying home – so this seems like a good time to reflect on the whole experience. It’s not something I do often; usually I’m so busy doing things that I don’t stop to think about them much.

During a long, rainy journey to Ansfelden in Austria yesterday, we were using the time to brighten the journey by sharing music were really passionate about – and I was pleased to let my bandmates hear the fantastic songs of Anais Mitchell and Karine Polwart. For me, the most exciting recordings Ive heard on the tour were Gillian Welch and Dreamers Circus. But I was also reminded yesterday of how much I love Kate Rusby’s music – and one of the lyrics (from the song Withered and Died) really captured the tour for me – kind words in my ear, kind faces to see.

A handcrafted wooden mouse was gifted to me by an audience member a few nights ago (he had made mushrooms for the boys and mice for the girls!). It’s one of several presents I’ve received over the course of the Cara tour. These little random acts of senseless kindness (as I think Oprah Winfrey coined them years ago) can make all the difference. But it’s not only the audiences…

This is my first experience of being in a band on a long tour, and while I have been pining for home, I feel truly privileged to have joined a group where not only are the musicians super talented, but they are also kind. Ryan’s daft antics in the van have distracted me from feeling too homesick, while Rolf’s interesting conversations have helped to pass long journeys, as well as educate me on all the fact-related stuff that is a completely different world from the one I normally inhabit. Steffen the sound engineer’s polite warmth and friendly smile is combined with a good ear – not only for the gig but for what people have to say – while Juergen’s quiet words of reassurance and encouragement have given me more confidence. And Gudrun seems to have an intuition (or good perception?) where she understands how people are feeling, combined with a compassionate nature where she uses that knowledge for good. In an experience which I was apprehensively stepping into the unknown, I’ve felt safe and cared for as a result.

I’m feeling like a very lucky girl, to have this opportunity. Roll on January!